The US national debt

The amount of the gross outstanding federal debt issued by the United States Department of the Treasury (since 1790) has surpassed $19 trillion for the first time in history according to usdebtclock.org.
Other sources show it is almost $19 trillion.
The US national debt, shown on the site is actually the federal government debt.
Strictly speaking, the US national debt should be the total of federal ($19 trillion), state ($1.2 trillion), and local debt ($2 trillion).
Totally it is around $22 trillion. If we add corporate and personal debts it will give approximately $65 trillion. 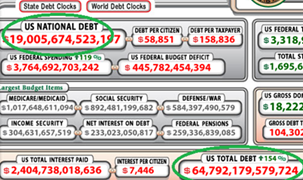 Nevertheless, the real problem isn’t the amount of debt but rather demographic situation in the country.
If the U.S. is going to have fewer people working, what is going to be with GDP and safety-net programs such as Social security and Medicare?
Definitely, projects deficits will rise again but what about the potential output of the U.S. economy?
If the economy slows down and interest rates will stay very low, this situation, also known as a secular stagnation, is basically the same as in Japan.
Therefore, debt as long as partnered with productivity and GDP is not a problem.

The debt-to-GDP ratio hit its all-time record of nearly 120% by the second World War‘s end but the debt shrank in significance as the U.S. economy grew.
Debt-to-GDP began another upswing in the early 1980s, when Paul Volcker raised interest rates to record heights in order to defeat inflation.
The Debt-to-GDP ratio jumped sharply in 2008, when GDP tumbled.

The government debt as a percent of GDP may be a common international measure but it makes little sense since not all national income is collected in taxes. In reality, it is better to examine the government debt to government tax revenue, i.e. $19 trillion is divided by $3.3 trillion which yields approximately 575%.

Funny facts about the government debt: