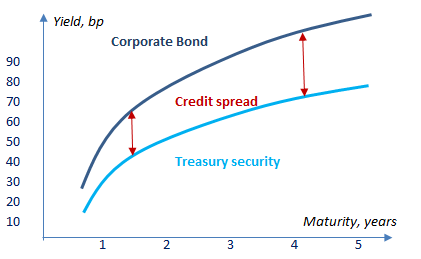 There are two degrees of freedom associated with reduced-form models: the probability of default and the recovery rate R.
In the corporate market, recovery rates are generally somewhere in the neighborhood of 40%.

Taking into account these two parameters as inputs, we can derive credit spreads from fixed-income securities. Let’s see the following example.
Corporate bonds are considered to be risky investments and thus P, the price of the bond, can be shown as: 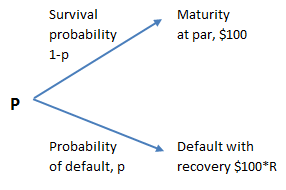 This binomial model shows that:

If we value this bond without taking into account the probability of default, we clearly see the difference in pricing:

Credit spread causes the difference between these two valuations and thus it is easy to derive the spread:

It is possible to show that one can accurately approximate the credit spread using the credit triangle formula:

Using this equation we recalculate an approximate value of the spread again:

In the example we were dealing with unconditional probability of default, i.e. the rate of default at a future time assuming only that the reference entity is alive now.

In practice, there are two ways of quantifying probability of default.
These are hazard rates and unconditional default probability density.
Both are related with each other and can be used to price CDS contracts.

Hazard rate is known as a conditional probability of default in a period.
This is the probability of a company to default over the period given that it has not defaulted up to the start of the period.