When writing about commodity swaps, a key component over the last decades has been the colossal development of interest rate markets, namely swaps. Swaps are simple form of derivative instruments where two counterparty exchange “something for something”. As been written in the article Derivatives Market, derivative contracts are concentrated mainly in interest rate products such as Interest rate swaps ( shortly IRS). It can be easily seen that IRS are most traded contracts within all derivatives markets. I would not analyze the reason why IRS so popular but I would like to mention that the swap market exploded for other derivative contracts as well. Now, we are talking about commodity swaps that have almost the same definition and functionality as IRS, meaning if you understand how IRS works then you can understand how commodity swaps structured.

Reasons to trade commodity swaps can be different but the main goal is obviously hedging.

The point being, when you talk commodity swap, it assumes an agreement to buy/sell a commodity at a time in the future.
This is exactly the same definition as a future or forward contract. But there is a difference.

First of all, future contracts assumed to be physical settled on the commodity markets.
A forward contract is a one period contract, e.g. you have only one fixed period from today until the maturity day in the future.
Forward is usually cash settled, so there is no need to deliver any physical commodity.

Commodity swaps are very close by their properties to forward contracts, e.g. they are a set of forwards with different periods.
Therefore, if a commodity swap is one period it calls forward. If a commodity swap is multiple periods it calls swap.
Now it is clear, if we take Dec14 – Mar14 and Mar14 –Jun14 forwards we may call them a two period swap or a swap that consists of two striplets.

Swaps are always cash settled. These instruments are OTC (Over the counter) contracts. OTC swaps are very flexible; any client’s need can be satisfied and structured but as been mentioned before OIS – untold story, take care about valuation and pricing. It is clear, OTC contracts bear counterparty risk. Therefore, there are cleared OTC swaps that allow an Exchange substantially mitigate counterparty credit risk, e.g. OTC trades are submitted to the Exchange to offset positions initiated with different counterparties. The Exchange offers position netting and trade confirmation taking some fees per contract.
Been said, commodity swaps are cleared OTC contracts, these instruments not available for trade on the Exchange and expired on a different schedule than futures contracts.

A commodity swap usually involves energy markets, such as oil, gas and electricity but other commodity instruments can be used as well.
It is assumed that the payment date for commodity swaps is the fifth business day following the pricing date in the calculation period. Calculation period is one period from the effective date to the termination date.

Single currency commodity swaps are swaps where both legs are in the same currency. Multiple currencies can be used as well, for example, one leg is USD while the other is GBP. Such swaps are called quanto swaps because they initiate a foreign exchange risk. While single commodity swaps with one underlying have only one discount curve, quantos with one underlying, for example Brent, will have three curves to take into account, one curve is a Brent forward curve, one curve is for the first currency and the other one is for the second currency.

If the commodity swap has two different underlyings we will have four curves to be used in the pricing. It is worth to say that quanto swaps should have price adjustments in order to capture correlation between commodity underlying and currency pair. Therefore, there are additional inputs to take into account, such as correlation and volatility of underlying and currency pair. For example, WTI is traded in USD but final payments will be in GBP. The sold position in WTI expressed in GBP can be easily hedged by buying WTI in USD. If GBP/USD stays on the same level at maturity then it is a perfect hedge. But if GBP appreciates, the loss occurs. As may be seen, by changing the correlation between WTI and GBP/USD we estimate the additional correlation effect of the trade profitability.

As been said above, swaps can have fix and floating legs. If one side is fixed and the other is float we say fixed for float swap, meaning that we know in advance all fixed payments. Float-float swap will have two legs with unknown payments in the future. Crude oil versus a refined product or Brent versus WTI can be example of float-float commodity swap.
The one side who is paying the fixed leg is the buyer; the floating side is the seller. All fix and floating payments are netted together.

The simple form of such swap is one period swap with 1 striplet. 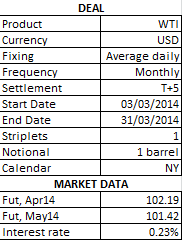 We use Market Data, Fut Apr14 and Fut May14 for pricing. As can be seen from the picture “FIXING” below these data are used for price averaging.