Products: iPad, iPhone, Apple Watch, and Mac are the most intuitive, engaging, and powerful tools for business.
With innovative hardware, software, and services that deliver an amazing user experience, Apple empowers today’s modern workforce to do something truly great.

Strategy: is broad differentiation.
Strategic objectives: continuous innovation, Apple must develop innovative products to stand out against mojor competitors.
As a result, total R&D expense was $8.1 billion, $6.0 billion and $4.5 billion in 2015, 2014 and 2013 respectively.
Apple’s focused product portfolio and R&D initiatives aim at long-term success and survival.

Area: the company’s domestic and international net sales accounted for 35% and 65%, respectively, of total net sales.

Growth is High:
Based on the analysis of the fundamentals, AAPL seems to be one of the best-value IT names in the market.
Apple’s earnings dropped in the most recent quarter on a year-over-year basis but revenue and EPS remain very solid.

Profitability is High+:
The Company paid a total of $11.4 billion and $11.0 billion in dividends during 2015 and 2014 respectively.
The dividend growth over the past three years has been solid and the company has shown a dedication to returning capital to shareholders.
Additionally, buybacks create indefinite dividend growth potential. 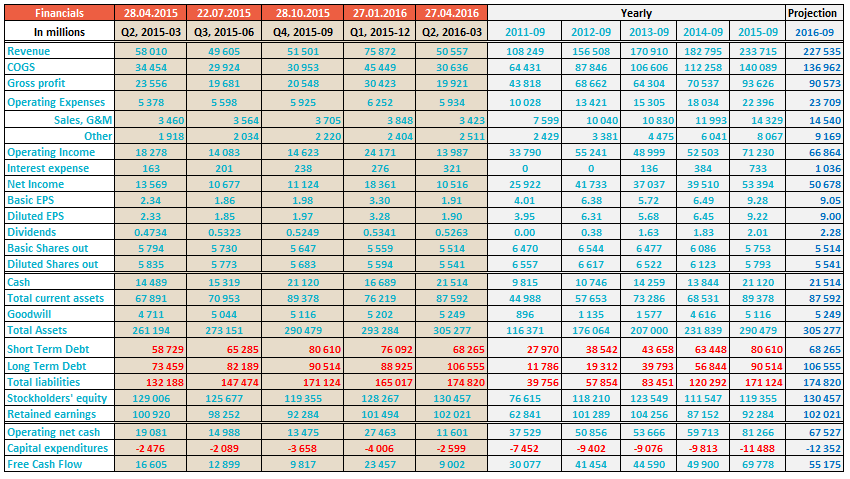