Services: is the largest retailer in the world. Nearly 260 million customers visit more than 11 500 stores under 63 banners in 28 countries and e-commerce sites in 11 countries each week

Strategy: is to lead on price, differentiate on access, be competitive on assortment and deliver a great experience.

• Walmart U.S. generated approximately 62% of net sales in 2016
• Walmart International consists of operations in 27 countries outside of the  U.S
• Sam’s Club consists of membership-only warehouse clubs and operates in 48 states in the U.S.; Puerto Rico.
Sam’s Club accounted for approximately 12% of our fiscal 2016 net sales
Growth is Low+:
The company provided a strategic framework intended to strengthen its U.S. and e-commerce businesses.
The new trend of buying online and picking up in-store will be Wal-Mart’s great competitive advantage over rival Amazon. Online services
will allow Wal-Mart to achieve significant cost savings but currently WMT remains stuck in a very difficult turnaround resulting in extremely thin operating and net margins.
The company faces lack of growth drivers both domestically and internationally, as a result, returns in Wal-Mart recently have been poor.

Profitability is Stable-:
Wal-Mart has a solid track record of dividend payments and dividend growth raising its dividend year after year. The major point here is that
stable yield is better than a yield that is increasing merely because of falling share prices.
Nevertheless, investments in e-commerce requires a lot of money.
Online and digital initiatives are expected to total approximately $1.1 billion in fiscal year 2017. Therefore, fiscal year 2017 will represent the heaviest investment period.

Financial health is Stable+:
It seems like the company has a disciplined approach to managing its financial resources and portfolio,
i.e. the financial position is strong despite the current weak operating margins. In the same time, free cash flow looks excellent and has grown materially 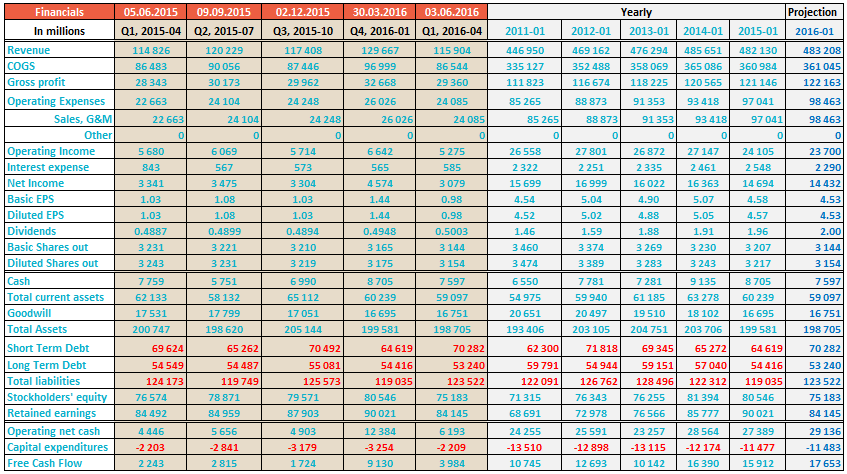 1962: July 2, Sam Walton opened the first Walmart store in Rogers, Ark.
1969: October 31, Wal-Mart Stores was incorporated in Delaware
1970: October 1, Walmart offered 300,000 shares of its common stock to the public at a price of $16.50 per share
1972: August 25, Walmart shares began trading on the New York Stock Exchange under the symbol WMT.
1983: The first Sam’s Club opened in Midwest City, Okla.
1988: The first Walmart Supercenter opened in Washington
2000: Walmart.com was founded