Amaranth Advisors was a multi-strategy hedge fund with positions across asset classes. It was founded in 2000 by Nick Maounis with headquarter in Greenwich.

Energy was a growing colossus in Amaranth. As of June 30th of 2006, the fund held energy trades accounted for about half of the fund’s capital and generated about 75 percent of its profits.

The fund’s main idea was calendar spreads in the U.S. natural gas derivatives allowing holding winter month positions and short summer month futures.
Generally, the prices of summer and fall futures contracts trade at a discount to the winter contracts and that is why such strategy is considered as a pretty safe.

Look at the chart below. These humps are simply the premium for storing natural gas.
An owner of a storage facility can buy summer contracts and simultaneously sell winter contracts. The price difference is the return for storage.
Therefore as long as the storage costs are under the spread locked in between summer and winter future contracts, then the operation is profitable. 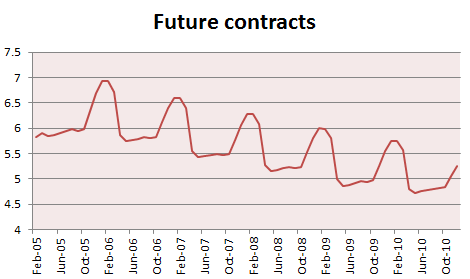 Physically, with the maturity of summer contracts, the storage is filled in with physical natural gas.
Later this gas can be sold when winter contracts mature.

The weather forecasting models are used to estimate the natural gas demand and natural gas inventory is taken into account as well while forecasting gas prices.
Of cause, there are storms and hurricanes that have significant impact on supply and demand.
Forward prices for natural gas and electric power reached record-high levels in 2005 because hurricanes Katrina and Rita shut down many gas platforms and gas processing plants. Gas prices reached $15.78/MMBtu as highest high on December 13, 2005. 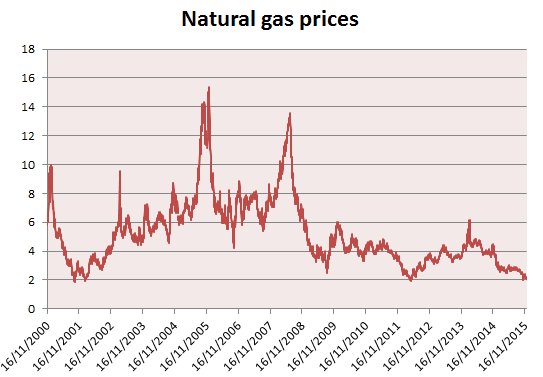 The Amaranth strategy utilized these weather conditions with bets on winter prices that could spike on cold weather.
It is worth to say, that except during weather driven periods, gas prices normally fall between prices for residual fuel oil, as a low, and heating oil, as a high.

In general, the downside of the strategy is warm winter.
Hot summer or cold winter would tend to increase gas prices, while mild weather would do the opposite.
If there are hurricanes in summer, winter prices will provide better return for storage.
If there are predictions of an exceptionally cold winter, the winter contracts trade at a large premium to spring contracts.

It is said that Amaranth exploited other gas trading strategies as well but what finally brought down Amaranth was good weather and lack of risk management limits based on liquidity of trading contracts.

As of August, 31, 2006, the fund had about $9.2 billion in assets under management.
On September 18th, 2006 Nick Maounis, the founder of Amaranth, had issued a letter, informing that the fund had lost an estimated 50% of their assets.
By the end of September 2006, these losses were about $6.6 billion.

Finally, the natural gas prices stabilized as it became clear that the fund sold its positions to Merrill Lynch, Citadel Investment Group and JP Morgan Chase.
The reason for stabilization was simple. The Fund’s positions were so large that any attempt to reduce them would result in a major price decline.
The fund couldn’t simply unload the position.

So, what actually happened with the fund’s positions in 2006?

During the latter half of 2005 and the beginning of 2006, it was expected a strong El Niño could lead to significant consequences for the natural gas market in North America.
Expected devastating hurricane season was a part of the Amaranth’s trading strategy.
Heavy bets on the same weather conditions that would mirror the previous two years in terms of destruction gave pretty good returns in April 2006.
The fund was up nearly $2 billion. But by the beginning of May prices of gas for delivery far in the future suddenly collapsed which led to a loss of nearly $1 billion.
This loss was a paper unrealized loss, so the fund remained committed and continued bet on a repeat of the previous year’s destructive weather by extended his short summer/long winter position out over several years.
This was a heavy bet on weather, more like casino game with unpredictable fortune.

By September, the price for natural gas reached its lowest level and Amaranth wasn’t able to pledge additional margin.
The reason for lower prices was simple.
The market learned from their previous year’s mistakes and also due to the warm winter weather the reserve storage increased mitigating the storms’ impact.
This was against the fund’s strategy.

The undulating prices caused by Hurricane Katrina and Rita made a fortune for the fund but then Mother Nature destroyed it.

Many people blame a trader who was responsible for gas operations in the fund.
Personally, I don’t think this was his failure rather this is a systematic risk management failure.