An important conceptual problem is the Siegel Paradox.
It states that if the equality between the forward exchange rate and the expected spot rate holds in the domestic currency then it can’t be simultaneously true in the foreign currency.
This simply violates Jensen’s inequality.

Mathematicians say this phenomenon is a mathematical inconvenience but not a matter of economic or empirical significance.
It is explained as a reflection that nominal gains do not reflect real gains when there is stochastic inflation and therefore the paradox is a monetary illusion.

To clearly show the problem, let’s consider the following case with USD/CHF exchange rate.
The exchange rate itself is a random variable and that is why we can apply expectation about forward rates.

If you live in the U.S. then it is worth to know how much $1 will cost in term of swiss francs.

If you live in Switzerland then it is worth to know how much 1CHF will cost in term of the U.S. dollars.

Assuming risk-neutral world and taking into account that arbitrage ensures in equilibrium the following conditions: 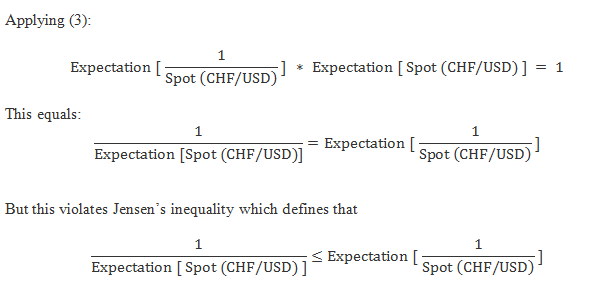 Well, have you ever wondered about what happens with final results if some fixed fraction of an initial amount of money is lost and then the same fraction of the remaining amount is gained?

The simple example shows that the final result is less than the original amount:

This is the result of Siegel Paradox.

This practical example shows that there are different expectations of how the exchange rate might be. Again, this happens due to Siegel Paradox.