During World War II, the Petroleum Administration for War used five districts to help allocate fuels derived from petroleum products.
Although the Administration was abolished after the war in 1946, Congress passed the Defense Production Act of 1950, which created “Petroleum Administration for Defense Districts” (PADDs) with the same five districts.
Today, PADD regions are still used for data collection purposes and are helpful in understanding supply and demand.
The Energy Information Agency (EIA) is currently in charge of surveying oil market players and tracking stats by state and PADD level: 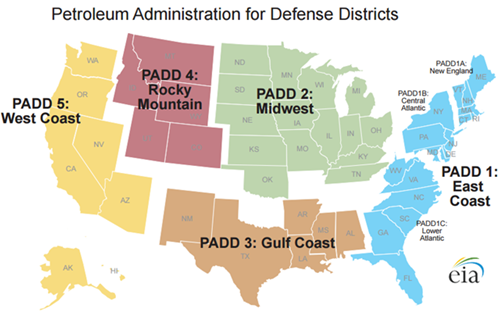 Due to its large population, PADD 1 is further divided into sub regions, with PADD 1A as New England, PADD 1B the Central Atlantic States and PADD 1C comprising the Lower Atlantic States.
There are two additional PADDs 6 and 7 that encompass U.S. Territories but are not pictured on the map.

Number and capacity of operable petroleum refineries by PAD district can be easily downloaded from eia.gov and analyzed by number of refineries and total output of processed oil.

PADD 1 has 9 operable refineries with 1.3 million bpd of atmospheric crude distillation unit (ACDU) capacity.
Due to its population accounting for nearly 50% of the entire United States, this region is a major consuming area and the largest user of imports.
With only 9 refineries, PADD 1 has the largest gap between total U.S. percentage of refinery capacity and total population.

PADD 3 is the most important region including Texas and the federal offshore fields in the US Gulf.
More than 55% of the country’s refinery capacity and most of the country’s heavy crude processing capacity is located in PADD 3.
The region’s 56 operating refineries with ACDU units have capacity totaling 9.8 million bpd.
With only 15% of the total US population, the region has capacity to export oil products to other PADDs, especially to PADD 1.
Most of the crude oil goes to PADD 2 refineries, while most refined products go to PADD 1.

PADD 2 has 27 operable refineries and 3.9 million bpd of ACDU capacity.
This is a significant regional crude oil producer but also processes crude oil from outside of the region: Canadian crude oil imported directly via pipeline and the crude oil from PADD 3 region.

PADD 4 covers the Rocky Mountain region including Colorado, Idaho, Montana, Utah, and Wyoming.
It has the least amount of refining capacity, 17 refineries with 0.7 million bpd ACDU capacity.
It has the lowest petroleum consumption and imports crude oil from Canada to augment local production for its refineries.

PADD 5 has 31 operating refineries with 3 million bpd ACDU capacity.
This region is notorious for the highest fuel prices and is logistically separate from the rest of the country.
Its crude oil supply is dominated by production from the Alaskan North Slope oil fields.