Differences in absolute level between crude oil and refined products occur because:

1. Location hubs. Typically, hubs are the backbone for scheduling, logistics and liquid trade.

Around 1/3 of third party storage located in global oil hubs. Hubs are often characterized by:
– Interconnections among many pipelines
– Being adjacent to other modes of transportation — such as tankers and barges, rail, and trucks for local transport
– Having substantial storage capacity

Official sales prices based on North Sea prices. Most crude oil types are priced FOB at the country of origin. 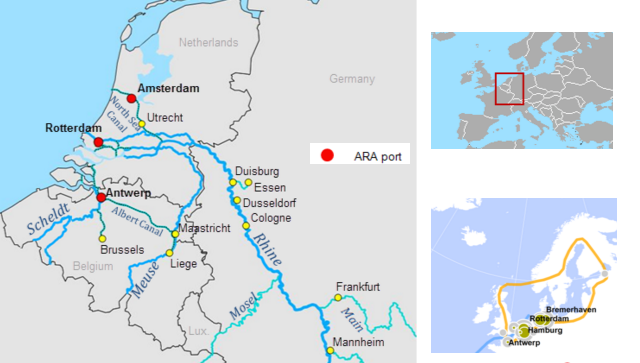 1.3 Singapore (SING) is the undisputed oil hub in Asia and is one of the world’s top three export refining centers.
Oil and its products are priced here for the region. Singapore also has sizeable oil storage facilities and a port which handles trans-shipments of smaller cargoes into the region.
Nowdays, Singapore is running out of space for the facilities needed to store crude oil and products, billions of dollars invested into neighboring Malaysia and Indonesia to take up the slack. In the US hubs are organized by the major geographic refining and supply centers: US Gulf Coast, East Coast and New York harbor, West Coast and Alaska supplies, The Midwest – Chicago market 3.1 The global crude oil and refined product tanker fleet uses a classification system to standardize contract terms, establish shipping costs, and determine the ability of ships to travel into ports. The system known as the Average Freight Rate Assessment (AFRA) system, was established by Royal Dutch Shell and is overseen by the London Tanker Brokers’ Panel (LTBP). 3.2 Barges: a typical 30,000-barrel tank barge can carry the equivalent of 45 rail tank cars
and usually operated in tows of no more than three or four barges together.