The concept of interest rate risk is often confused by a lot of terminology but actually is one of the easiest and straight forward approaches: how price changes as yields change, i.e. what is the sensitivity?

There are two measures of interest rate sensitivity in fixed income: Duration and DV01.
These measures often deal with parallel shifts in the yield curve but in reality yield curves may undergo different strange twists, flattening, steepening etc.
One approach toward solving this problem is key rate duration (also called partial DV01) and bucket exposure.
For simplicity purpose we assume parallel shifting in this article.

1. DV01 (Dollar value of a 1bp) defines how much the clean price of the bond will change for a one basis point move in its yield to maturity.

2. The other definition is the change in the bond’s value for a 1bp change in market yields.

DV01 also referred to as PV01/PVBP (present value of a 1bp). Market has also developed several alternative terms such as Risk, Dollar duration or Delta. Therefore, assuming parallel shifting of the curve we define the interest rate risk as follows:

1. In the table above we calculate Risk by shifting market yields (actually Zero yield curve) by 1bp up and down.
Total resulting Risk calculated in the column “PV01”= 0.02884258. It is said to be effective DV01.
Effective DV01 takes into account both the discounting that occurs at different interest rates as well as changes in cash flows.
It is useful when a portfolio contains callable securities.

As can be seen the difference between two calculations is minor for a single bond.

Duration can be used as a measure of risk in bond market. It comes in many forms.
The most commonly used are Macaulay and Modified. The concept is the longer the duration the more sensitive a bond is to changes in interest rates.

This duration is sometimes referred as the average term of the cash flows weighted by their present value.
From our calculation it follows that after 2.94 years we will have gotten $100 repaid, i.e. it takes 2.94 years to recover the true cost of the bond. 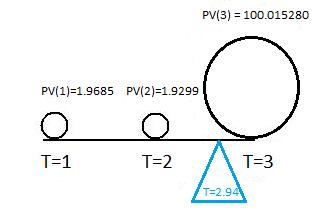 Formally, Macaulay duration is constructed by taking the derivative of the present value of each cash flow with respect to yield of a bond:

We can rewrite this as:

Taking into account that DV01=-∆P/∆Y this formula can be rewritten as:

In order to measure an absolute change in the bond’s yield we use Modified duration that expands Macaulay duration:

We can rewrite this as: ∆P = -MD*P*∆Y. Consider our bond selling with MD = 2.8838.
For every 1% change in the bond’s yield the market value of the bond will move inversely approximately by 2.8838% without taking into account convexity effect.
The calculations are attached in the Excel file.

Modified duration is always smaller than Macaulay duration and is extensively used in practice.
Generally, DV01/PV01 is a more accurate and more general measure of interest rate sensitivity than duration.

DV01/PV01 can be used for instruments with zero value such as Interest rate swaps where percentage changes and modified duration are less useful.
Valuation of swaps depends on a sequence of discount factors and there is no such thing as a yield on a swap.
DV01 can be used for any sequence of positive and negative cash flows.

1. DV01 is the change in present value of the swap for a 1bp parallel shift in the swap curve.

2. PV01 is the present value of a 1bp annuity with a maturity equal to the swap maturity. PV01 shows how much the value of the swap changes if the fixed coupon changed by 1bp. Note, the swap curve remains unchanged.
As we see, DV01 and PV01 are completely different things. They are not the same as in the bonds world. DV01 ≈ PV01 only if we deal with a par swap.

A swap has a positive DV01 if the swap curve shifted downward by 1bp and the swap’s value increases.

A negative DV01 is when the value of the swap decreases when the curve is shifted downwards by 1 bp.