There are four money markets in the world having interbank offered rate fixings in USD.
The USD LIBOR in London is the most recognised and predominant one.
LIBOR rates are calculated for 7 maturities, including 1 day, 1 week, 1 month, 2 months, 3 months, 6 and 12 months.

Interest rate futures, LIBOR based derivatives, are among the oldest financial future contracts that
allow business and banks to hedge their borrowing interest rate risk because borrowing rates move more in tandem with LIBOR than with the government’s borrowing rate.

Eurodollars are time deposits denominated in U.S. dollars. They were introduced on the Chicago Mercantile
Exchange (CME) in December, 1981.

Futures are exchange-traded, they are standardized and have specified delivery dates, sizes and procedures.

Specifications for the Eurodollar futures contract

These contracts are quoted in terms of the “IMM index.” The IMM (International Monetary Market was established as a Division of
Chicago Mercantile Exchange) index is equal to 100 less the yield on the security, i.e.,
Eurodollar futures price at expiration of the contract:

If current LIBOR is 0.16% over 3 months, by convention, the annualized rate is calculated by multiplying by 4, so the quoted LIBOR rate will be 0.64%.

The Eurodollar contract, described above, is based on a $1 million 3-month deposit earning LIBOR. Assuming a bank borrows $1 million for 3 months, a change in annualized LIBOR of 0.01% (1 basis point, b.p.) would raise its borrowing
cost by

It is important to understand that the Eurodollar contract settles based on current LIBOR, which is the interest rate quoted for the next 3 months. Thus, the price of the contract that expires in September reflects the 3-month interest rate between September
and December.

While these contracts mature in March, June, September and December (However, the Exchange also offers “serial” contract months in the four nearby months that do not fall into the March quarterly cycle months.) over the next 10 years, the most liquid mature in the next two years. The table below lists the first few contracts with their expiration dates and prices. 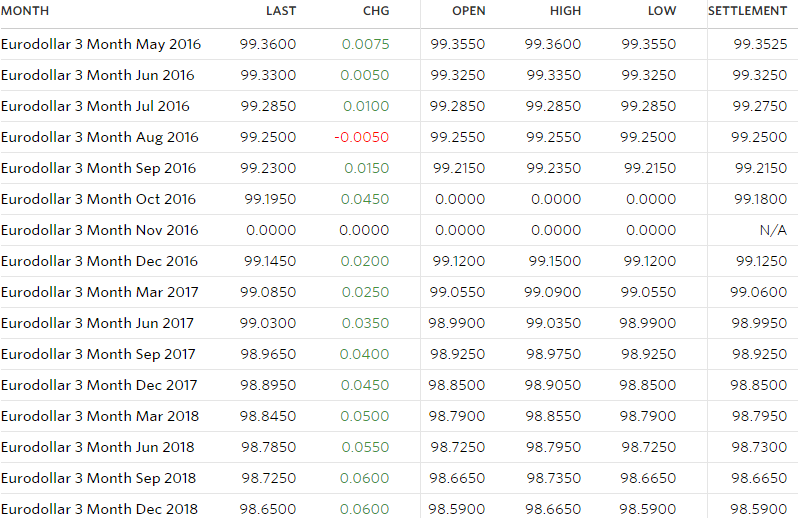 Each contract has also its own symbol that consists of “ED” for a 90-day Eurodollar contract, a month (H for March, M for June, U for September, Z for December) and a year.

LIBOR is quoted assuming a 360-day year. Thus, the annualized 91-day rate, can be extracted from the futures price by
computing the 90-day rate and multiplying by 91/90.

The Eurodollar futures strip (the set of futures prices with different maturities at one point in time) provides interest rate information that is used to price other interest rate derivatives. For example, bootstrapping is a method where the prices of Eurodollars can be used as an input to build interest rate curve. The usefulness of bootstrapping is that using only a few carefully selected zero-coupon products like Eurodollars, it becomes possible to derive par swap rates.