Credit default swaps (CDS) are the most basic credit derivatives instruments.
A credit default swap is a privately negotiated bilateral contract designed to transfer the credit exposure between two parties.
Therefore CDS provides insurance on a notional amount against the risk of a default (credit event) by particular company (reference entity).
CDS spread, expressed in basis points per annum and typically paid quarterly, is a premium paid by CDS buyer to the seller. 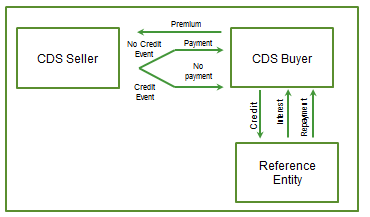 Contracts are documented under International Swap and Derivatives Association (ISDA) swap documentation and the 2003 ISDA Credit Derivative Definitions.
Due to ISDA documentations market participants have standardized terms and conditions of CDS contracts. Generally, the following six issues are considered to be triggers to a credit event:

Bankruptcy — Reference entity’s insolvency or inability to repay its debt

Failure to Pay — The reference entity, after a certain grace period, fails to make payment of principal / interest

Obligation Acceleration – For reason of default, Obligations of the Reference Entity have become due and repayable prior to maturity and have been accelerated

The most liquid maturity term for CDS contracts is 5 years. CDS contracts typically have four maturity dates: 20th March, 20th June, 20th September and 20th December.
CDS contracts allow getting an exposure to single-name credit (in both high grade and high yield credit) as well as trading based on indexes of CDS (CDX in North America and Emerging Markets, iTraxx in Europe and Asia).

While single-name CDS is typically physically settled, CDS indices and tranches are cash settled. In physical settlement, the buyer delivers the bond from the CDS underlying pool and thus the buyer has a cheapest-to-deliver option.

It can be said that a CDS works like a put option on a corporate bond, the protection buyer is protected from losses incurred by a decline in the value of the bond. Accordingly, the CDS spread can be viewed as a premium on the put option, where payment of the premium is spread over the term of the contract.

Valuation of Interest rate swaps is based on future cash flows. These flows are discounted to the present and initially the present value of floating leg should be equal to the present value of fixed leg. This means market value of Interest rate swap is set to zero from the beginning.
Exactly the same principle is used to value CDS but the cash flows are further discounted by the probability of default.
The valuation of CDS can be thought of as a scenario analysis where the reference entity survives or defaults.
There are two cash flows, namely the flows from the Fee Leg and the flows from the Contingent Leg.
On the Fee leg side, the buyer pays a series of fixed payments until the maturity or default whichever happens sooner.
On the Contingent leg, the protection seller makes one payment only if the reference credit defaults.

At inception, the value of the expected cash flows is equal and it makes the CDS value equal to zero, i.e. there is no exchange of money when two parties enter in the contract,
PV(Fee Leg) = PV(Contingent Leg).

The spread demanded for buying or selling CDS usually depends on the maturity time of CDS.
In the same manner as we have Forward interest rate curves for different maturities, Credit curves show spreads plotted against maturities.
We see the same principle in work, i.e. interest rate for 1-year is usually lower than for 2-years period and buying protection for 2-years usually means paying a higher spread than buying protection for 1-year.