Inktomi: Read before you buy

Initially priced as low as $12 per share, the stock went public on June 10, 1998 at $18 and doubled its first day.
The company raised an estimated $36 million on the sale of two million shares.

In August 1999, a secondary stock offering was made raising $300 million. 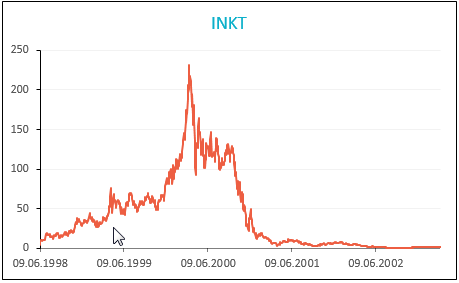 Inktomi was founded in February 1996 by Eric Brewer and Paul Gauthier.
The company was named after a mythical Lakota Indian spider known for cunning rather than brute force.

The mission was to build scalable software applications at the core of the Internet, i.e. search engine based on home-grown parallel clustering technology.
Parallel technology involves stringing many computers together to work on a problem simultaneously, a potentially faster and more powerful method than tackling the problem with a single large computer.

Actually, web search engines were served from big machines based on microprocessors that used the RISC architecture.
Alta Vista ran on enormous machines built around the RISC architecture.
Inktomi was able to demonstrate that a cluster of hundreds of cheap computers could actually significantly outperform the fastest RISC chip.
Following Inktomi’s principles, Google built its search empire on commodity servers equipped with processors based on the x86 architecture Intel originally built for desktops PC.

When Inktomi went commercial, it took a different approach from other search engine companies.
Instead of marketing its search software itself, the company sold its database and search engine as a product.
But Inktomi was not just a search provider. It introduced Traffic Server and Shopping Engine as well.
Traffic Center grew out of Inktomi’s clustering experience and managed network data flow eliminating bottlenecks and redundant traffic and bandwidth.

Inktomi began its move into e-commerce software solutions such as Shopping Engine with the acquisition of C2B Technologies in September 1998 for about $90 million in stock.

1996: Inktomi introduce Hotbot, a new search engine for the World Wide Web.
1997: Inktomi launches traffic servers. A large customer who took interest in Inktomi’s traffic server technologies was Microsoft.
<1998: Yahoo! decided to use Inktomi’s search engine technology as their preferred choice. Acquisition of C2B Technologies.
1999: Inktomi enters e-commerce market with a shopping search engine. Inktomi acquired WebSpective Software for $106 million. WebSpective produced content-replication and distribution software, which made it easier to offload and back up data from a web server.
America Online announced that it would drop Excite and replace it with Inktomi’s database for its search engine.
2000: Inktomi acquires FastForward Networks for $1.3 billion in stock. Inktomi acquired Ultraseek from Infoseek for $344.7 million.
2001: Content Bridge alliance begins limited operations. Content Bridge was formed as a content distribution network, where producers and hosters of information and e-commerce functions would pay to have their content pushed to the caching servers of large Internet hosting
2003: Inktomi was purchased by Yahoo! for $235 million

For the 1998 fiscal year, Inktomi posted revenues of $20.4 million, a 253% increase over revenues of $5.8 million for the 1997 fiscal year. Net loss for the year was $24.5 million compared to a net loss of $10.4 million in the prior fiscal year, reflecting the growth in development, marketing and operations worldwide. As for me, this wasn’t a positive sign. Basic shares out increased drastically, another negative sign. May be some one was delighted with the revenues for the fiscal year and the steady growth in both Search and Traffic Server product lines, but what was the price that stockholders paid? As can be seen from the price chart above, somebody even paid more than $200 per share.

Inktomi reported its first profitable quarter in April 2000 for the quarter ending March 31, 2000. It posted a profit of $1 million on revenue of $47.3 million, compared with revenue of $15.2 million and a loss of $7.4 million for the same quarter in 1999. The company’s quarterly profit was equal to about one cent per share. 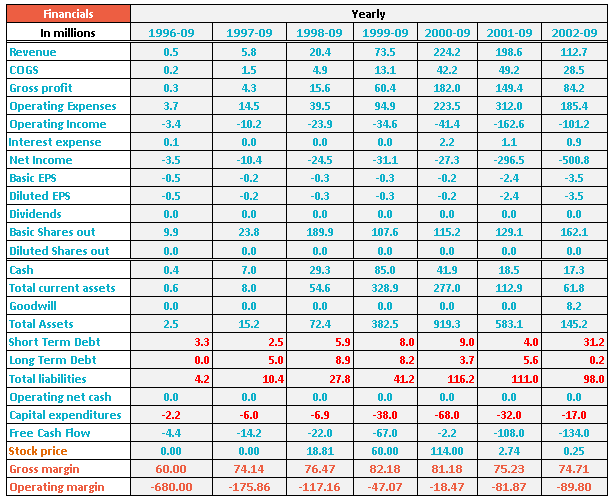 For fiscal 2001 ending September 30, Inktomi reported a net loss of $296.5 million on revenue of $198.6 million. Much of the firm’s net loss was due to one-time charges and amortization.

In 2002, firm’s net loss almost doubled and after the bursting of the dot-com bubble, Inktomi was acquired by Yahoo.

Obviously, Inktomi impressed people with its core technologies but it wasn’t enough. Inkotmi’s major problem was realized and fixed by Google. That wasn’t all about displaying hundreds of results to the user but more about satisfying the need for information.

The experience of this IPO should send a warning to those who seek companies that glitter but still financially unstable.