YUM has over 42,000 restaurants in more than 130 countries and territories.
Primarily through the three concepts of KFC, Pizza Hut and Taco Bell, the Company develops, operates, franchises and licenses a worldwide system of restaurants which prepare, package and sell food items.
Restaurants are operated by independent franchisees or licensees.

Effective January, 2016 the India Division is no longer a separate operating segment.
In October, 2015 YUM announced the separation of YUM’s China business from YUM into an independent, publicly-traded company by the end of 2016.

Pizza Hut
• The first Pizza Hut restaurant was opened in 1958 in Wichita, Kansas, and within a year, the first franchise unit was opened.
• Pizza Hut operates in 95 countries. In 2015, Pizza Hut had 1,903 units in China, 432 units in India and 13,728 units within the Pizza Hut Division.

Taco Bell
• The first Taco Bell restaurant was opened in 1962 by Glen Bell in Downey, California, and in 1964, the first Taco Bell franchise was sold.
• Taco Bell operates in 21 countries. In 2015, there were 6,400 Taco Bell units within the Taco Bell Division, primarily in the U.S., and 7 units in India.
• Taco Bell specializes in Mexican-style food products, including various types of tacos, burritos, quesadillas, salads, nachos and other related items. 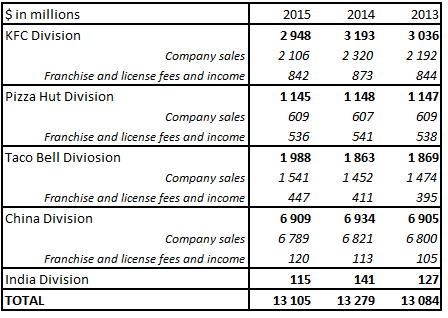 Growth is Stable:
Indeed, in 2015, Revenue was down 1.3% but Operating expenses decreased by 16%, Operating Income increased by 23% and Net income was up 23%.
Basic EPS increase of 25% makes the company attractable for future investments at the lower stock price level.

Profitability is Stable-:
The company still has a very solid level of ROE and ROA. But what about Stockholder’s equity?
Well, Yum is likely to become a more efficient entity if Gross, Operating and Net margins will stay at the current levels.

Financial health is Low-:
The firm’s cash flow generation is relatively stable.
Yum! Brands’ free cash flow margin is about 8.9% but in the same time the Leverage ratio is around 9%. This is unbelievable and is too dangerous. 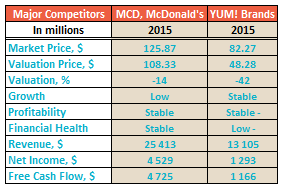 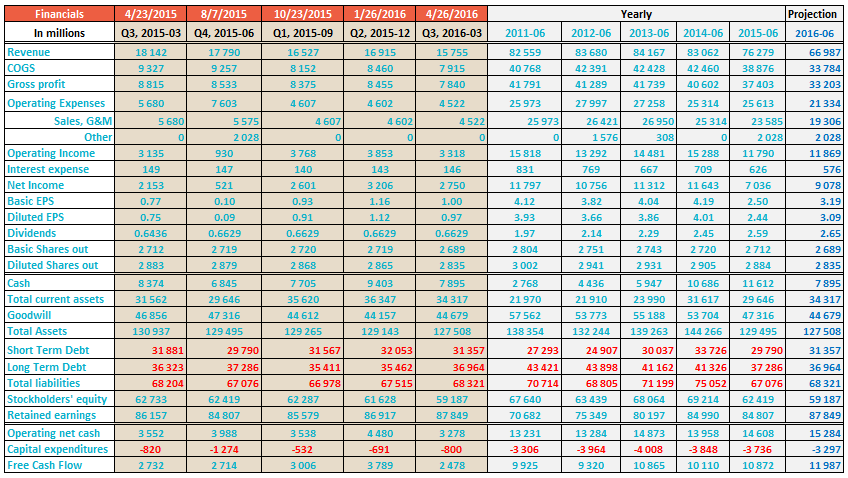